Green Box was first, while we were still at Monroe I think. Box set copyright 1980. Green boxes were put out on the cheap. The color art was identical on all, with a light green title rectangle wherever the title was to be and a green color tint back panel (first release). The color part of the boxes were printed up in large quantity for the volume discount. Only the black plate needed to be changed out for the different individual products. It contained black type and illustrations on the back, and black rectangles with type reversed out to let the green show through for the title and specific product info. A second run of color-art boxes was done for the second release, the only change being a gold tint to replace the green, so there was at least some immediately perceivable difference on the shelf to identify the new release.

The Royal Guardsman (Heritage's factory store) catalog of summer 1980 lists Paint n Play and the first release (green type - 3501, 02, 03, 04, 05) of the green box sets. No white box sets or second release Green Box sets. In fact, several of the figure packs containing white box figures were marked as new summer 1980 releases, so the white boxes were in the future.

The Fall 1981 Heritage USA SALES MANUAL AND WHOLESALE CATALOG lists the Green Box sets and Paint n Play, the blister packs, ten Painted Figure packs, and the first issue Dungeon Floors (black-grey-only mechanical artwork, in shrink-wrap), and the last hurrah of the scenoramics line "Dungeon Walls" under the DD imprint. Also, the Denizens of the Dungeon sets (plastic figures), the Adventure Game Starter Sets (plastic figures, paint, brush, die, tiny rules); both with no Dungeon Dwellers markings - probably in order not to attach the shame of plastic to our flagship line, or piss off TSR who licensed AD&D to us for metal figures only, I seem to recall. AG Starter Sets was the leadoff product in the catalog, surprisingly. No White Box sets listed.

So WBs had to be a 1982 product. The white boxes were done right. Sturdy construction, foam inserts top and bottom, individual art. That was after we knew we had a winner (such as it was) in the Dungeon Dwellers fantasy figures, and were willing to invest more. Interestingly, the Dungeon Dwellers name is very small in plain type on the boxes - don't know if that was to avoid offending TSR after we failed to get the licensing for Advanced D&D, or if we tried to de-emphasize the name because the line was fading (?), or if I just got tired of it, or forgot to put it on and added it as an afterthought. The old creepy DD art and style did clash with the new Heritage "White Boxes" style on Dwarfstar and Swordbearer, which I wanted to make the new Heritage corporate style. Bright to attract the customer's eye, very clean for an upmarket look, very legible in terms of type and individual product ID. One disadvantage of the DD art is that it was dark and didn't jump off the shelf to the customer's eye. 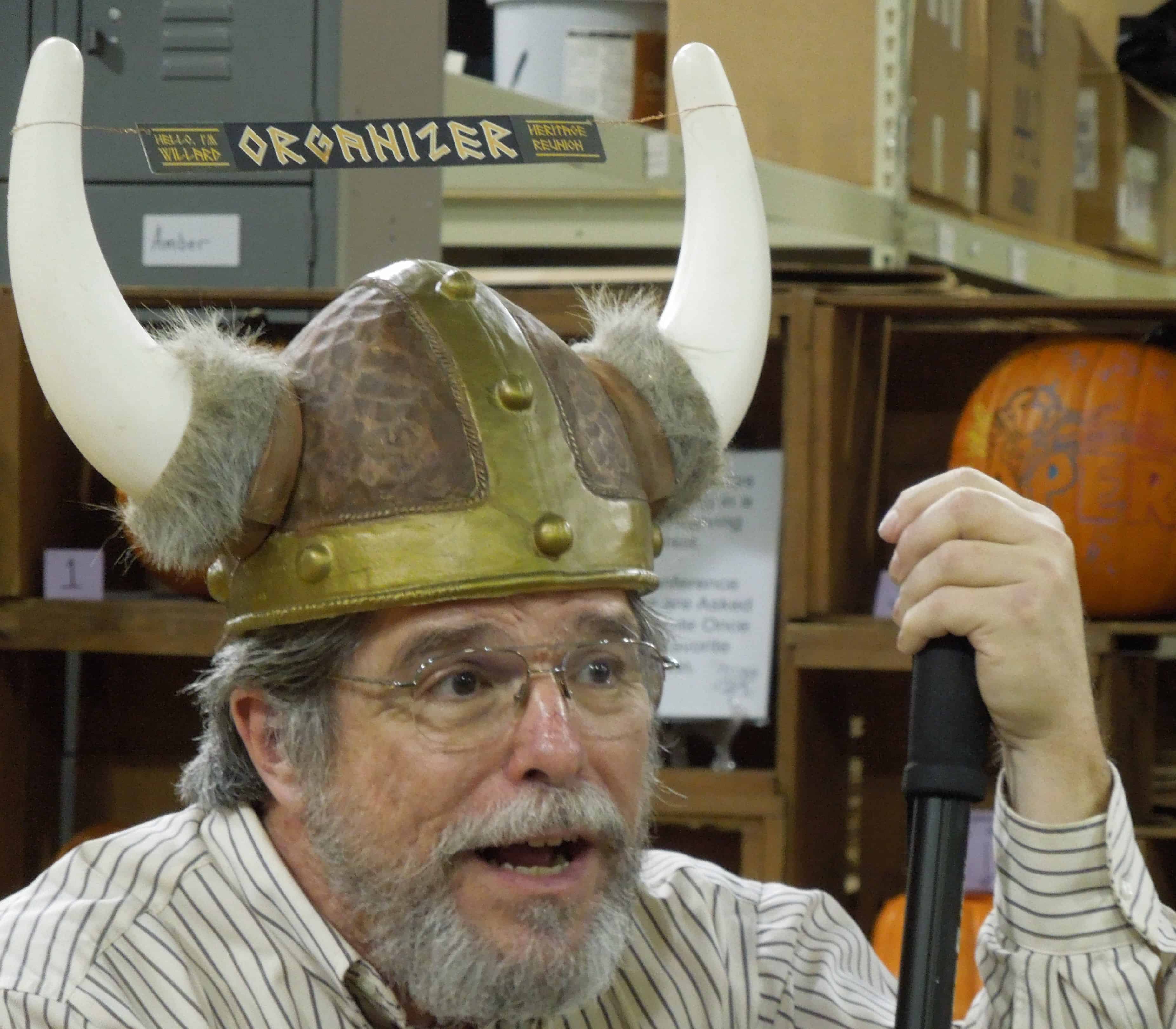 What was the time frame for production of the Paint n Plays?

Late 1979 to (my guess) the bitter end. Late '82, the first few weeks of '83, don't recall exactly. Probably have the last bounced paychecks somewhere.

How / why was David Wenzel chosen to do the Artwork for the White Box sets?

Howard Barasch was tickled by Wenzel's 1980 picture book "Kingdom of the Dwarfs" and showed it to me. I contacted him about the Denizens of the Dungeon plastic figure sets. I wanted Frank Cirocco for all four, but cost prohibited it. Cirocco was expensive. Wenzel, in spite of the book publication, was more reasonable in price and willing to work with us. I made it a point to offer all the artists credits on the box (unusual at the time) and purchased only First Publication rights, so the artist got back the painting and could exhibit or sell it or even sell for publication within the terms of our contract. These were significant bonuses to the artist that cost us nothing, so we got fairly good illustration prices from good illustrators.

For the White Boxes, money was tight, so I asked Wenzel if he could do us some quick works (watercolor, as I recall, with little inking), not as completely finished as his usual art, and he agreed. I think only the Level 4&5 Monsters illustration really shows the economy. It was the last, and really crowded the deadline. It obviously was done very quickly indeed. Still we clearly got our money's worth on the series as a whole. Wenzel was great to work with.

Why is there a gap in the numbering between the Green and White Box Sets?

I think we (maybe just I) really thought of the WBs as a different product line. I guess we left room in the 3500s to add more Green Box sets, if the WBs were not successful or if for price or some other reason, we decided to continue the old version in addition to the new or instead of it.

Besides you, Who else did the line art for the inserts? I have seen "CM" on a couple of images.

Those are by Cynthia Sims Millan, a Heritage Art Dept. employee for a while, and a far better draftsman than I. I think she also did some contract work for us after she quit. As I recall, some of the bigger figures were done in an unusual way - Max was swamped with work, so Cindy did some line drawings that a contract sculptor, and Max in a few cases, worked from. I remarked that it was very strange that Cindy, who drove me to distraction with the sweet, rather feminine look on the Adventure Game Starter Set artwork, suddenly caught fire when asked to illustrate these demonic subjects. Cindy also did the "Diorama Background" art and box art for the red Boxed Painted Figure sets that Duke wanted to reflect the red elongate Britains classic lead soldier set boxes. But ours was vertical. I don't think anyone confused the two. Any unsigned line art is probably mine.

Do you recall any other outside sculptors used to sculpt some of the DD miniatures? There are a few that Dave, David, Max and Steve do not claim.

As mentioned above, a contract sculptor did some of the late, larger pieces, the demons and others. I think it was a woman, and known in the hobby, so I'm tempted to say Julie Guthrie, but it's just a stab in the dark. Max might remember, or Ed Andrews. Some or all of the contract pieces were done to Cindy Millan's drawings. "Dave"?

Did the failure of Heritage to obtain the rights from TSR to produce figures / miniatures under the Dungeon and Dragons name lead to the demise of the company?

I wouldn't have said so. If anything, I'd have said the Dungeon Dweller line allowed Heritage to continue as long as it did. But that's just the impression of the guy at the drafting table. The owners didn't do color-separations, and I didn't analyze cost and profit numbers.

There's also the question of which Heritage you are asking about. Is it the Heritage of 1977, who supplied the military-gaming market with its own historical miniatures and cast Hinchliffe under license? Was that Heritage a profitable and stable small company in a niche market? I don't know, but If it was, then the decision to roll the dice and try to follow the TSR path by turning it into a mass-market big-bucks national toy/game company was the decision that ended up killing it. That's a calculated gamble, and that's what ambitious business people do. The odds are always stacked against spectacular success, but 'a man's reach should exceed his grasp, or what's heaven for?' as the poet says.

But I suspect the constituent companies were marginal and struggling, and the reason they united was to try to use the sputtering military gaming business as a base to try to cash in on the RPG phenomenon. In that case, Heritage was dying before it was born. Whatever was done just extended or shortened that process, and the "thing that killed Heritage" was the fact that it was at the time practically impossible to make money steadily in that industry. When your main product can be essentially duplicated in quantity by anyone with $20 worth of RTV silicone, a coffee can of old wheel weights, and a stovetop. you're starting the journey rowing upstream, sez I.

If we're talking about the Heritage of 1980 or 1981, already committed to the mass-market strategy, then here are several major factors that I see as contributing to its demise (remembering that I'm an artist, lacking business training or temperament).

1. The first Home Video Games craze - 1981 and 1982 were the years Home Video Games invaded the leisure-time market. It's hard to believe today, but the crude low-res games were absolute wonders for their time, and they sucked a large percentage of the consumer's leisure-time dollars away from more traditional games and toys for several years. Established companies with more resources were able to ride out the wave and resume making money again when the newness began to wear off the electronic products. Marginal companies like Heritage, which had borrowed and stretched itself to the limit in a bid to supply the raw materials for the next national craze, simply got swamped.

1. The Sears Effect - I have since read that this is a fairly common occurrence. Small company makes it into

2. The Plastics Project - It was pretty clear that creating a mass-market company with metal miniatures was going to be tough sledding. Metal had very low startup costs -- a $35 rubber mold and a low-tech centrifugal machine, and you were in business. Unfortunately each casting cost a lot in materials and labor. Plastic had astronomical startup costs - at the time a single set of two-part engraved dies (metal molds) for injection molding cost from $ 20,000 up (2008 equivalent: $46,000) - but after that, the per figure production cost was practically negligible. If you intend to sell lots, plastic is the way to go. For $3.95 Heritage could sell a blister pack of five figures, while Airfix or Revell were offering boxes of 50 plastic historical soldiers, only slightly smaller scaled, but much more realistically proportioned, for about the same price.