These sets were level based and included a variety of monsters for your adventuring party. These sets had the most miniatures and averaged at least 20 miniatures per set. The exact number of miniatures can be found on the individual box set page.

3507 Monsters of the Lower Depths

Unlike the leveled sets, these sets included some of the most feared creatures that your party might encounter. These sets did not have as many figures as the level sets due to the miniatures' size in these sets.

Each box set included miniatures, a tray, a painting guide, and a paper inspection tag. The artwork on the front of the Green Box sets was produced by David Helber (Art Director for Heritage). All of the artwork on the front of these sets were the same. The only difference between the sets was the titles, and for the later sets (3506, 3507), the color of the title area.

Depending on the set's age, there may have been 2 white egg carton style trays (see photo). The later sets used plastic trays that were compartmentalized. These trays came in various colors (see photo), with black being the most common. The colors were not specific to any set and appeared to have been randomly used. The switch from the egg style tray to the plastic tray is not known but had to happen before sets 3506 and 3507. This is based on the fact that these figures would not fit in the egg style trays.

Each set included a painting guide developed by David Helber and Duke Seifried (President of sales for Heritage). Duke provided the painting techniques that he was so famous for, and David developed the color schemes. Although this was a suggested painting guide, it gave the first time players and painters a suggested way to paint the included miniatures. Although David did most of the simple line art on the back of the sets and the painting guides, another staff artist, Cynthia Sims Milan, did contribute to the line art. The line art produced by Cyndi has her initials (CM) next to them. Another staff artist named Tom Maxwell (aka Max Nuclear) helped David with the layout and design of the painting guides.

The inspection tag (see photo) was a way for Heritage to ensure that each set had the correct number of figures and the appropriate figures for that set. If it did not, they knew who packaged it. 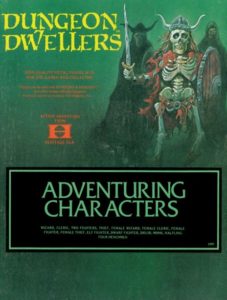 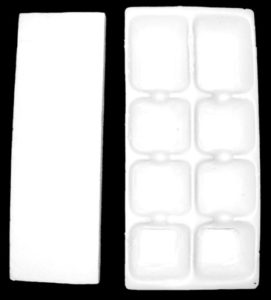 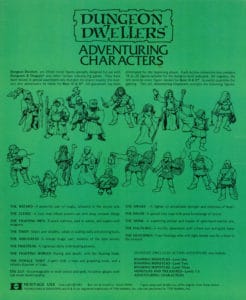 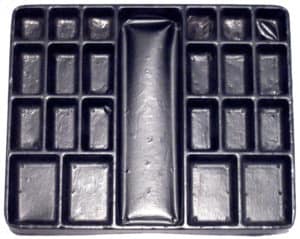 One thought on “Introduction to the Green Box Sets”