As taken from the box set:

“Caverns of Doom is an adventure game played with miniature figures which simulate heroic fantasy combats between wizards, warriors, and monsters in a forgotten age. Here is a realistic game in which you lead a band of adventurers into the dungeons and caverns of a fearsome dragon, and you make the decisions which can mean life of death for your comrades.” 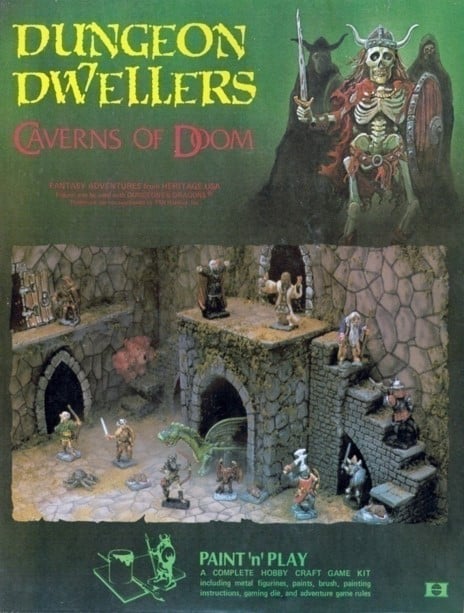 The Dragon (shown above; under arch) was taken form Heritage’s Fantasy line of miniatures, blister pack “1375 – Dragon”. Although not intended for this set, this dragon did make it into some of the early "1273 - Dragon" blister packs. When the photo for the box art was sent to the printers, final sculpting of the 1273 Dragon was not complete.

Included in the "Caverns of Doom" box set were 18 detailed 25mm lead miniatures. The descriptions listed below are taken from the back of the box set:

The Knight – 1202B; A noble fighting man in armor, the knight is sworn to destroy evil wherever it may lurk. His flashing battleaxe will be sorely needed in the depths of the earth.

The Cleric – 1204B; A holy man sworn to the service of his diety, the cleric can turn away the undead with his holy symbol.

The Thief – 1205D; Stealth and silence are the province of the thief, an expert at picking locks and disarming traps.

The Barbarian Woman – 1207A; A lusty adventuress in search of treasure and bloodshed, the barbarian swordswoman has made her way from the rough lands of the far north.

The Elven Archer – 1211B; The keen eye and magical arrows of the wandering elf can bring down monsters at a distance.

The Skeletons – 1238A and 1238D; Long-dead warriors animated by dark magicks, skeletons are the silent guardians of forgotten crypts and treasure troves. They cannot abide the sight of a holy symbol.

The Hobgoblin – 1241B; Large carnivorous hobgoblins live in dark underground passages waiting to attack other creatures. Though strong and fierce, they are blinded by bright lights.

The Vampire – 1254A; Undead terror of the night, the vampire waits to swoop down on his victim and drain its blood, making the victim a vampire under his own control.

The Demon - 1261A; Winged denizen of the neither world, the demon seeks to make all living creatures its servant via its dark spells and hypnotic gaze.

The Slime Monster - 1266B; The slime monster slides and spreads, flowing through small cracks and holes, dissolving living flesh with its acid touch.

The Great Rats (4 total break apart figures)- 1267A; Throughout the caverns are packs of great rats, two feet in length, and always hungry.

The Dragon - ????; None dare challenge the great dragon, whose gold is hid in the nethermost chambers of the caverns, for his claws and teeth are sharp, his breath fiery and fierce, and is possessed of a crafty intelligence and is expert in magick.

The Wizard - 3110A; Frail of body, but schooled in the mystic arts, the wizard is the guiding spirit of the adventuring band. Can his magicks overcome the terrors of the Caverns of Doom?

The figures shown above were the miniatures provided in the earlier sets. However, variations in this Box Set were possible either due to availability of a miniature, or updates to the figures. As such, some sets may have included either 1241A-1, or 1241A-2.

The Wizard (3110A) was originally meant to be part of blister pack “1200 – The Wizard in various poses.”, but was pulled when used in the Caverns of Doom set. 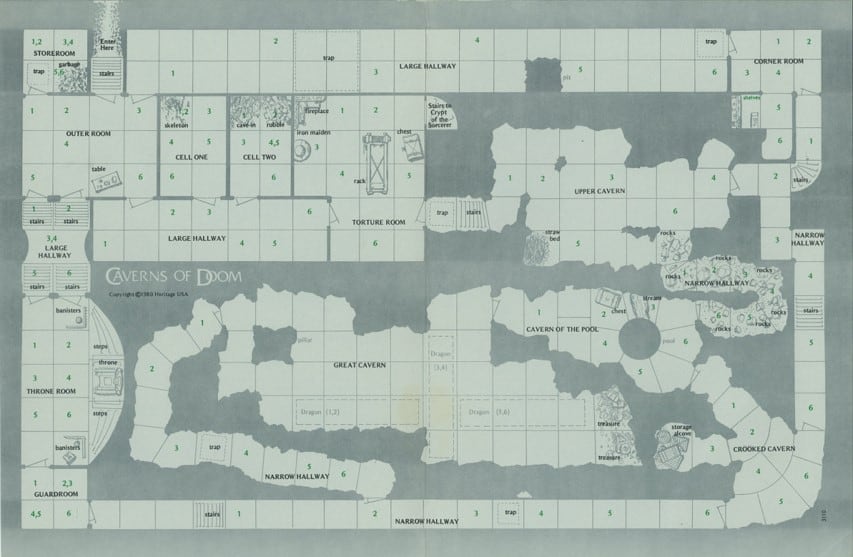 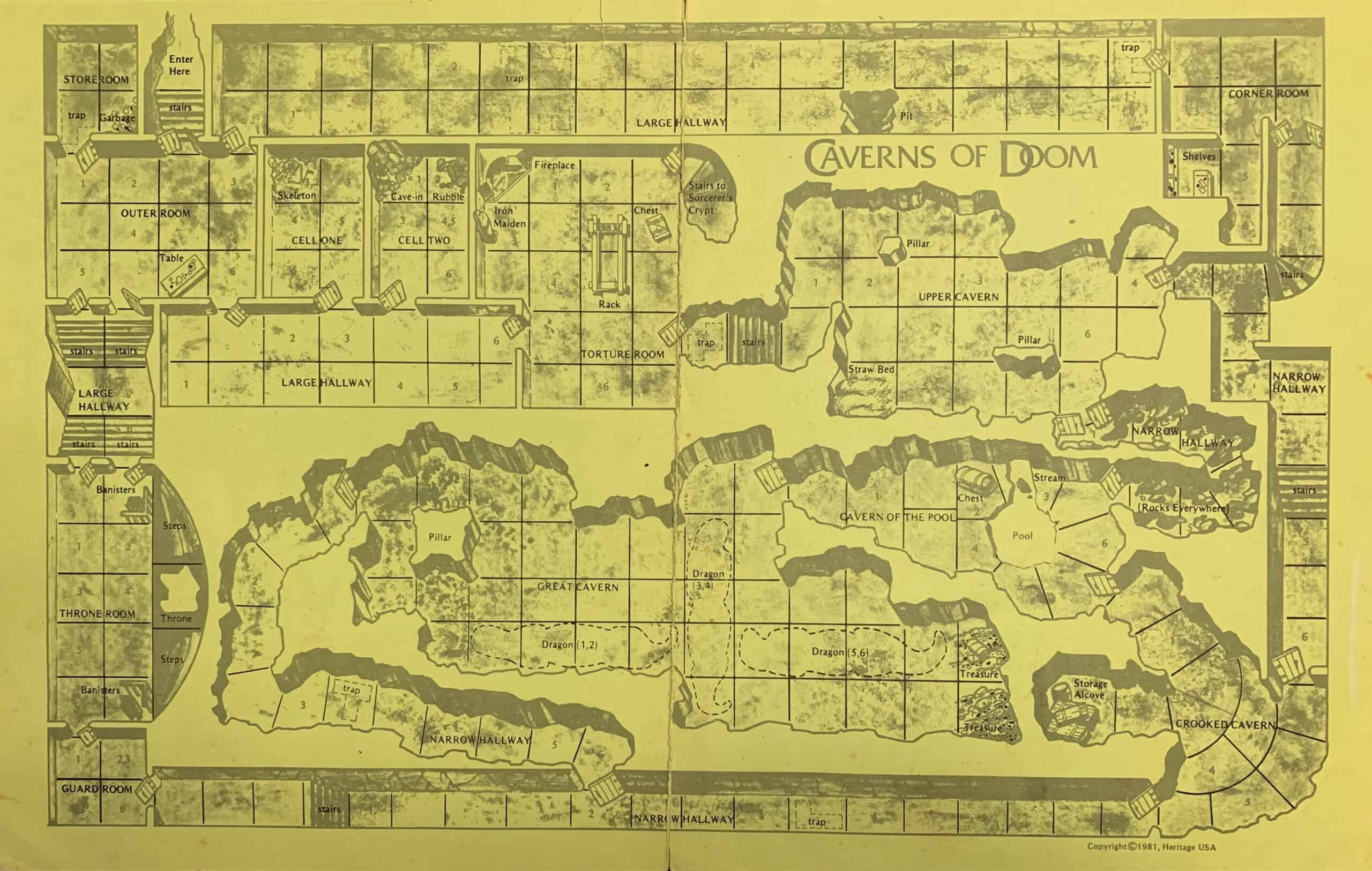 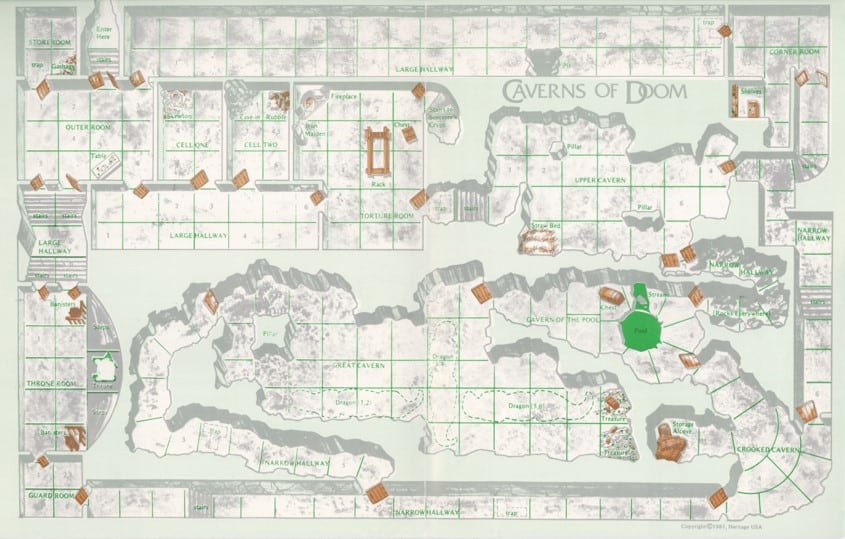 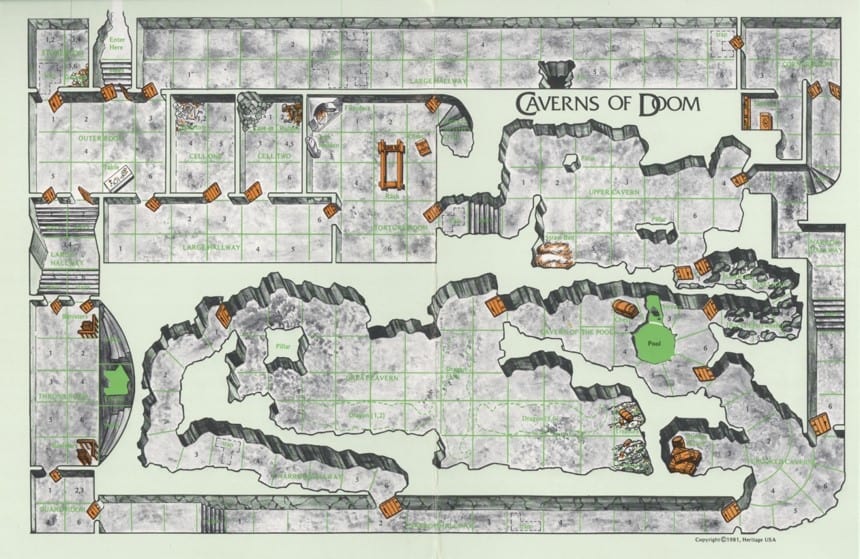 Map #1 (1980) was the first map that was included in the original release of the Caverns of Doom Paint'n'Play set. This map was printed on heavy card stock and included a map key on the reverse (as shown here). Map #2 (1981) was similar to map #1 but on a different color card stock. Map #3 (1981) was a revision to the original card stock maps and was printed on a heavy clay coat stock. With this revision, the map key was not included on the backside of the map. The colors in this version are somewhat muted compared to the final (Map #4). Map #4 (1981) was the final and most vibrant of the maps.